No gods no masters

#26 in Blog-a-Day for the month of January. Another brick in the wall.

I'm scared. I'm scared that all the leaders are dying and all that's left is our cynicism and smallness. I'm scared that the giants of my childhood, my imagined past and chosen values as an adult are leaving this plane, and I don't know who to turn to for inspiration. I'm scared that there won't be anyone left as I age, and that the possibility I feel in me is nothing but a remembered song from some late night campfire or end-of-workshop kumbaya.

Seeger. Baraka. Mandela. And it won't end. We die. We die like flies on a windowsill-- in droves. A generation is dying. It's just true. And it's a generation that has been a center of my fantasy, of my dreams.

When I was a teen, I was often called a hippie. I've written elsewhere that I have never self-identified as a hippie, but I do remember feeling like I was born in the wrong generation. It took my moving to West Philadelphia in my late 20s to feel like I had peers who were interested in the same justice and change that woke me up at night. I have felt out of step with a lot of my generation. 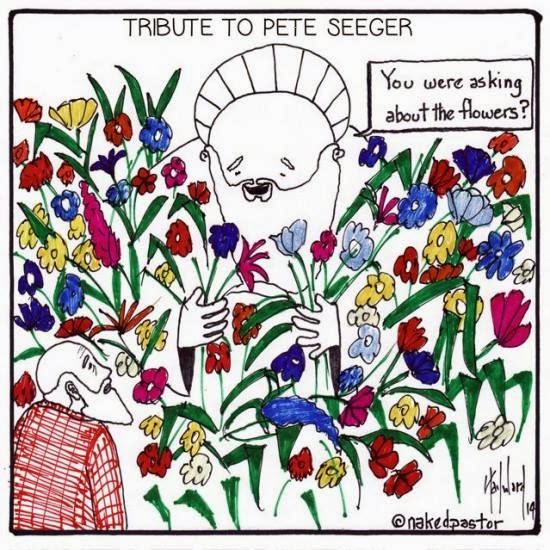 And the songs, the movements, the words and challenge of the cultural change agents of our time have buoyed me when I have felt isolated, and pushed me to keep on looking for places to explore the challenges, deepen my growth and commitment. What does racial justice look like? Sexual justice? Gender justice? Economic justice? Justice-love? The peaceable kingdom?  What is the truth of our dominant system? Where do we collude with these systems? How can we live differently? What is possible where we are-- right now?

And now, they are leaving us. Their truths remain, their inspiration. But I am scared. The giants are going. They've already gone.

I think Pete Seeger today really threw me-- ridiculous, I know, because he was in his 90s. It felt like a blow, a continued blow from learning about Mandela, and then Baraka. I was lamenting the lack of visible leaders like these giants, and then I read something that flipped the switch for me.


I encountered Pete last October when walking down a street in Hudson, NY. I lit up at seeing him- his concerts and albums informed my childhood very much. Pete, can I take a photo with you? Oh, I'm late for something. So I said, "well thank you for ALL you have done and everything you have stood for". He leaned in and said, with a twinkle, "You don't know the dumb things I've done". And he was gone.

Reading this encounter stopped me. Suddenly he was real. Suddenly he had done dumb things, too. This resistance to being put on a pedestal is maybe one of the best things I could have read today, as he left, as the reality of this dying generation is coming home to me.

Because no one is on a pedestal, unless we put them there. Because no one is a giant unless we imagine them that way. And what kind of radical am I, recapitulating the hierarchy of goodness and power that these folks resisted so relentlessly? Isn't the shared humanity and connectedness of movements of people what holds up and feeds these leaders art, resistance, and change work? They were because we were, writ large. They represented by being a part of a generation, not separate from it.

I think that the next generation of leaders are born, working, and leading already. My inability to see them is simply my own limitation-- limitation of experience, or limitation of imagination. And really this next generation is not for me, but for my children, for my students, for younger generations. Maybe it's time for me to stop being so scared about what is leaving, and start watching what comes rushing in.

Sometimes it's easier to feel fear than mourning. I still feel scared, but I will try to keep my eyes open through my tears, and listen for the beating heart of the new prophets and leaders already living their visions in this world that needs them so much. We stand on the shoulders of these human giants, who brought forth our better selves with their passion, vision, and leadership. And if we're lucky, we reach forward to the new human people who take up the work, from generation to generation.