Inspired by a piece I just read by Ben Hewitt, I will now try to share some of the story of our last day with our meat birds-- July 12. Warning: this gets a bit graphic. No, there are no graphic photos. 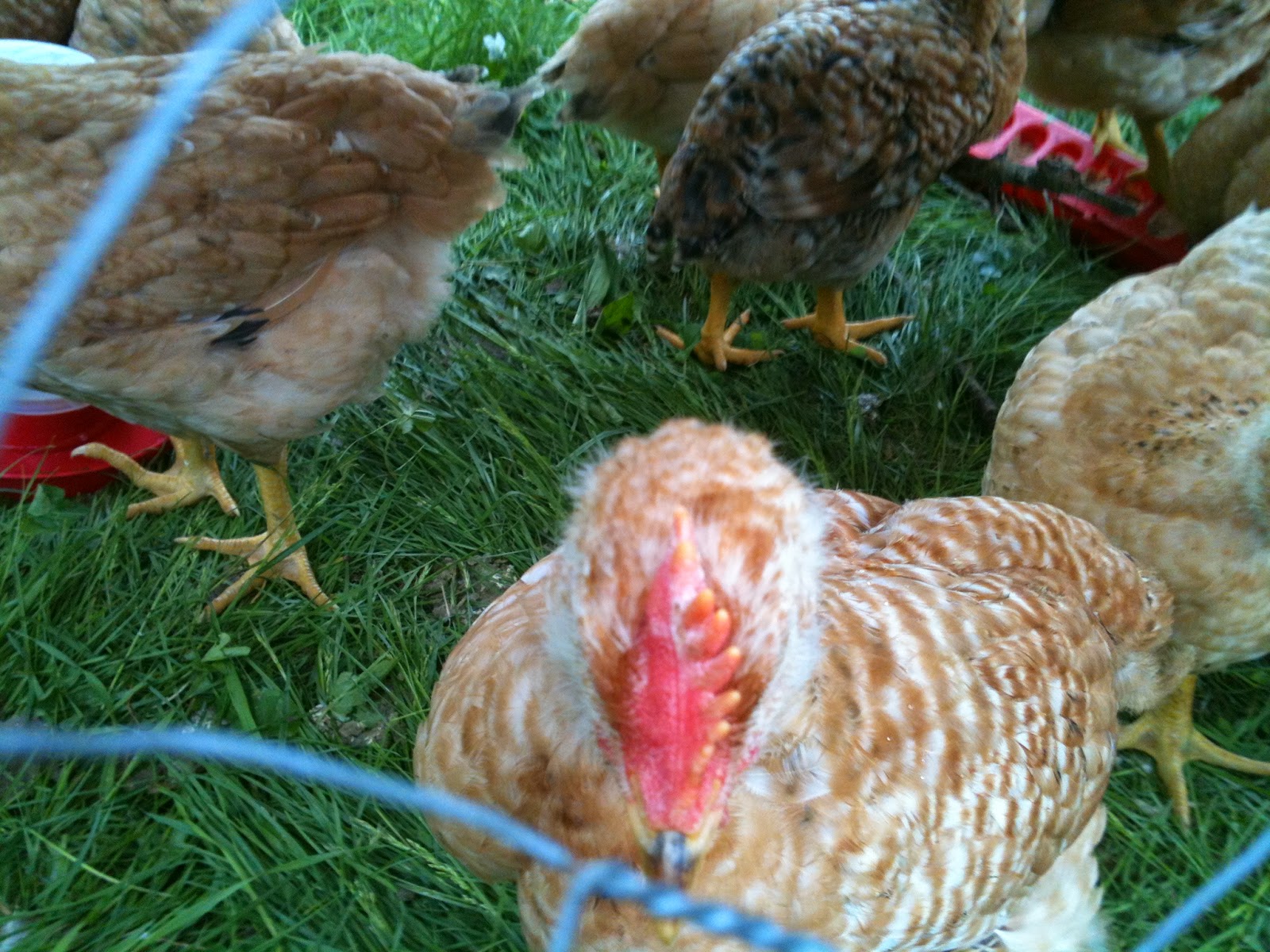 It's been almost a week since our first attempt at slaughtering our own chickens for meat. From waking at 7 to drive out and pick up the rented plucker to putting them in the freezer at 6 pm, we slaughtered and dressed 14 chickens. We didn't actually get started until around 11 am, and finished around 4, and let the chickens chill until 5:30, when I cut them and put them in our aunt's freezer. We also had a pretty solid lunch hour, so all tolled 5 hours for 14 chickens. Not bad timing for a fist go.

We started slow mostly out of reticence and insecurity. The four of us who signed up for this onerous task convened at 9, and we were still setting up, but the truth is we were slow at it. All of us wanted to do it. No one was forced. Our friend Aaron, the person with 1 or 2 slaughters already done, was our guide. He brought along a young friend Trevor, a rising senior at University of Vermont. And Norman, my partner, and myself made four. I felt like I was falling all over myself that morning, trying to be both hospitable and prepared, mindful and driven, alive to what was happening and still able to do it. I wanted to do it. I wanted to know what it was I was participating in.

It's not often that we get the chance to really know what we are participating in in this society. As a person of education and privilege, I know that there are so many people, beings on whose shoulders and back I stand in order to have the life I do have. I have had significant breakthroughs in this awareness over time, through accident and intention. But it's easy to fall into the stupor of the consumer. It's easy to forget the implications of the things we have.

If this is not ringing a bell to you, what I mean is that the clothes we wear, the food we eat, the accessories we use-- all of these are made somewhere, and often the where is far far away. Because of this distance-- of geography, culture, species-- it's easy to never know, or to never seek knowledge, or to actively ignore information that does not directly impact our lives. Mexican farmworkers treated like slaves while harvesting tomatoes on Florida farms? Feed lots in Colorado leeching nitrogen from cow manure into lakes and rivers? Factory workers killing themselves in China while churning out iPads? Not in my back yard. Not my problem.

So I approached chicken slaughter as a way to know what it is I am participating in when I eat chicken. It also was an attempt to unhinge from some of the industrial agricultural practices that are so very dangerous on so many levels. I think I have had some success on both of these fronts. I now know what it looks like to slaughter and prepare a chicken for eating. I now know what it feels and smells like.

We watched a video or two to refresh our memories on how to do this thing. We carried the first chickens to the cones, upside down, and put them in, let them chill out. We hugged each other before we started, and agreed to thank the chickens as we sliced the veins on either side of their necks. As the chickens struggled through their death throes, I watched and repeated thanks and sadness at their leaving. The blood was less than I thought, and painted the pallet the cones were tacked onto throughout the day. Within five minutes of their death, the chickens looked a lot like what we eat when we buy chicken from the store. Almost.

By far the hardest part of this process for me was the evisceration. For whatever reason, I didn't think that the inside of a chicken would want to stay on the inside. But it did. We spent a long time with those insides. And lucky for me, there were 3 other folks there who had a better handle on this than I.

And it did. Though we had a few close calls, all 14 were slaughtered and chilling by 4 pm, and we were able to clean up and harvest some gratitude greens and scapes for Aaron and Trevor. I returned the plucker in time, and came home to chop half of the chickens in half, dry them as well as I could, and carry them in 4 paper shopping bags up the hill, where they sit, quiet, white and pink.

I am writing this easily, as if I am telling a story that did not happen to me, that I did not do. The truth of this is that I killed living beings almost a week ago, and though I haven't the stomach to eat them yet, I imagine I will, over time. I took a knife and I bled something with a brain, with an insides that looks a lot like my insides.

This happened, and it was ugly and smelly and hard.

We have a neighbor who shares the house here, staying in a large studio apartment on the land. She had no interest in participating in the slaughter. In fact, we could find her often chatting up the birds when she got home from work. She is a sweet and compassionate woman. She told us, that day, that there was a calm over the land, that the seriousness of the task at hand felt respectful.

I like to think this is true, that this was how the world ended for these chickens. But the truth is a lot more complex than that, a lot messier, a lot more than I can really grasp, yet. Maybe it's a small thing, what we did last week, but it is changing me. This life is changing me, and I hope to be up for the lessons I am learning.
Posted by Unknown at 10:18 PM 2 comments:

At my second farm apprenticeship experience, back in 2007, one of my supervisors was a very smart and generally grumpy and loving man who taught me a lot. Chris McNichols, spouse and co-farmer with Amy Johnson, managed the 6 acre Red Hill Farm in Aston, Pennsylvania, where a 120 family CSA had pick ups twice weekly throughout the long and balmy Pennsylvania growing season.

I worked 40-60 hours a week, with no car and no other employment. Walking, biking, bussing to get where I needed to go, I ended up sleeping in a friend's spare room and getting a ride in early morning with Amy. As sunrise spilled across the hollows, we pulled ourselves up and over hills in the surprisingly rickety canvas topped jeep, and worked morning and afternoon in greenhouses and fields growing all manner of vegetable.

Chris would come in for the afternoon shift, as Amy and he would split childcare with their two children to make their farm dream possible. He would get to sleep in with the kids and roll in around lunch. By afternoon, after I'de passed out on the floor of the farm office for 45 minutes before grabbing round 3 of coffee to motivate for weeding in the sun, Chris was the motivator and teacher I needed to get through the hump of fatigue and heat that was the norm for me.

Chris was never one to look at a problem and rush in. He would think, he would fiddle, and he would come up with the solution that made the most sense, often with the least amount of exertion.
Was this laziness? Indeed not. He taught me the saying he lived by-- Work smarter, not harder. And he lived it. And he impressed me no end with his forward thinking and effective planning.

In this incarnation of my farming life, I've taken on this saying with a vengeance. My partner and I talk. A lot. We talk about multiple solutions. We talk about myriad problems. We talk. And this means things slow down. We're sitting on the need to slaughter our first round of chickens because of all the complexity in getting the systems together. We're slowly working on finishing the high tunnel as we talk about the best ways to move forward with labor and resources. We talk.

Does this make us lazy? Sometimes, I think it does. I cannot tell you how many folks, when I share the vision for life on the land here, echo an interest and desire for the same life, saying, I've thought about that, I'de like to do that, too. My initial response, which I keep to myself, is fear. Fear that there is nowhere for the food to go, the market is saturated, my thoughts and desires are pedestrian and useless.

But then I realize that there is a fundamental difference between thinking a thing and doing it. In a society that so values the thought over the action, that values symbolic work over actual physical work, and that denies the basic reality that you cannot eat money, it's easy to get caught up in the thinking about the doing. Sometimes I feel pressure build in me, of the undone task, the project incomplete. I feel physically uncomfortable with the not-doing. Never mind the overwhelm, which I can handle a bit better than the pressure. And so, when the thing gets done-- the plants planted, the weeding started, the purchasing for the project done-- there is a relief, a release of energy into the world.

Are these actions the best solutions? I honestly can say I don't know. Sometimes the thinking about a thing can deaden it, can make any solution seem incomplete. Time will tell, and perfection in farming is both illusive and truly an inductive process. We try a thing. It works or it doesn't. We talk to other farmers. We talk to ourselves. We try another thing. It works or it doesn't. And on and on.

I got to help with haying for the first time the other week, and it was loads of fun, at the very fine Center Farm less than 5 miles from us-- neighbors, as rural standards go. I was one of a handful of grown-ups, and a number of teens. It felt exciting to be able to keep up even in the slightest with teenagers. At one point I mentioned to one of the farm boys-- maybe 17-- the saying Work smarter, not harder, and he had something to say about it. He said, Sometimes that's true, but sometimes the work is just hard. And you do it. And if you don't do it, it doesn't get done. Farming is hard work.