So we are stranded in Hannibal, Missouri, for two nights, because a small crack in our windshield rapidly spread across our view, as the vibration of the overhead cargo hold in crosswinds encouraged it along. We were rushing, it’s true, to get to Dancing Rabbit Ecovillage, trying to travel from the amazing IDA community (of which I will write more later) in Smithville, Tennessee, to Rutledge Missouri in a day. With a toddler. Bad idea.

But we made the good decision to not continue on into the night, watching the crack spread. We stopped at the Best Western here, and today we took the Mark Twain Riverboat tour around the Mississippi River for an hour. Tomorrow the glass folks will have a replacement piece for our car, and hopefully we will get to Des Moines by dinner. We’ll see. 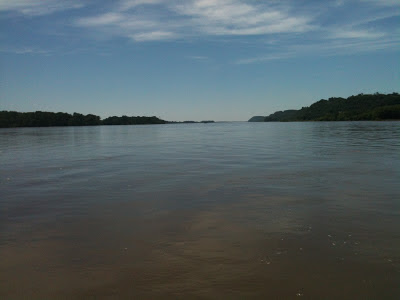 The Mississippi River is a wonder. Hannibal, which prides itself to a fault on its hometown to Mark Twain status—Mark Twain Museum, Riverboat, Fried Chicken, is missing something, as one of the many small towns on this giant’s shores. As we chugged along on the riverboat excursion, I could feel the roiling weight of the river, and as Forrest spoke at one point, ‘I can feel it moving.’  The river is alive in a way that seems unbeatable. And believe me, I believe we humans have tried.

The tour guide told us that the locks were to be closed tomorrow, because the floodwaters are coming—again. Once the locks close, the businesses and building on the other side are ignored, the railroad is abandoned-- the river wins. Islands in the river are covered with water yearly, and the famous Twain Island of Huck Finn fame has been flooded four times already this year. There were also many mentions of the flood of 1993, when the river was 17 feet above the normal range. 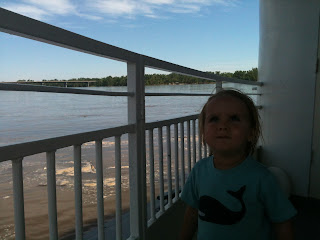 But something happened to me on that tourist boat, so close to the brown god below us, looking out at an ancient landscape so fundamental to this country, to the history and culture this country birthed, and is still forming, still struggling through. Something that I had not let in for a long time, and something that caught me so surprised and humbled, and well—I felt happy. Looking at my family, gazing out over the water. I felt happy.

And the tears came, at the gratitude and awe that I got here, finally feeling the freedom of letting go of a life I no longer wanted, and finding that what I truly wanted most stuck around. I no longer had to think that I had to suffer for my happiness. And that in fact I did not have to prove myself worthy of this love and life, fear for its destruction, or defend it from the avarice of others. I get this life, and this is the life I want. And I found this, today on the Mark Twain Riverboat.

So thank God(ess) for the broken windshield and the river and the chance to live this life. And as the quotation from Twain on the wall at the Mark Twain Dinette told me today:

Twenty years from now you will be more disappointed by the things you didn't do than by the ones you did. So throw off the bowlines. Sail away from the safe harbor. Catch the trade winds in your sails. Explore. Dream. Discover. 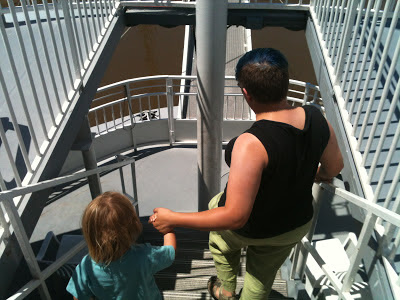